Get to the Point 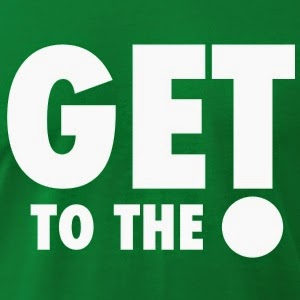 Oh my...do you know a person that never gets to the point? Perhaps you know someone that occasionally gets lost in their own story? Usually, I’m a very patient person, but there are those times when my brain is in high processing mode and it can’t wait for every superfluous detail to be revealed on the road leading to the point.

Strange that one so usually focused on details (me) can sometimes have such a hard time dealing with them. I’m fully prepared to put the onus on me in this case and admit that I’m the one with the problem. Even if that’s true though…I’m going to vent anyway.
Let me give an example and judge for yourself if I’m exaggerating the issue. 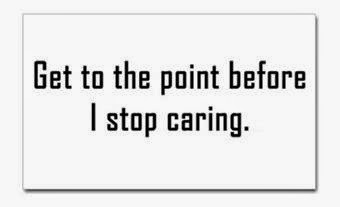 So there I was talking to a friend when they say to me “My sister found a wallet on the street the other day and you won’t believe what was inside it.” Now…if there was ever a hook to snag a person’s interest, that was it. My curiosity meter exploded because if the expected item you find in wallets wasn’t there (money), then I really want to know what was so “unbelievable.”

So…I took the bait and asked what was in the wallet. The response I got went something like this… 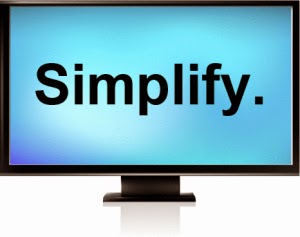 “Well, my sister tells me she found a wallet and couldn’t believe what was inside. I asked her what was inside, but instead she pulled it out and told me to look inside. I said to her that I wasn’t going to look inside and that she should just tell me. She then asked me why she should tell me when the wallet is right in front of me and I can simply look. Listen I said…if it’s something so unbelievable, then she should tell me quickly because I really want to know. She then says to me…” 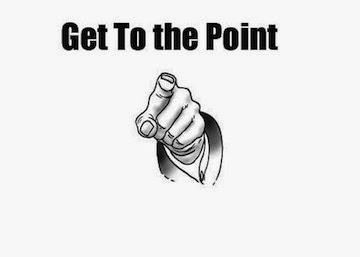 I swear, at that point, I blacked out. When my mind snapped back to reality I had already uttered four words that ensured that I would never find out what was in the wallet. I don’t even remember saying them…they just kind of lingered in the air accompanied by the look of disdain on my friends face. By the look you’d think I used my pimp hand instead of simply saying “Get to the point.”

Looking back now…having some time to reflect, perhaps my choice of words and tone were a sort of verbal slap, but I just couldn’t take the verbatim recounting of a conversation that had no bearing on what was actually in the damn wallet. Heck…now that I’m thinking about it, I still don’t know what was in the wallet (and I so much wanted to know). If I did use a verbal pimp hand, I hope it was the backhand! 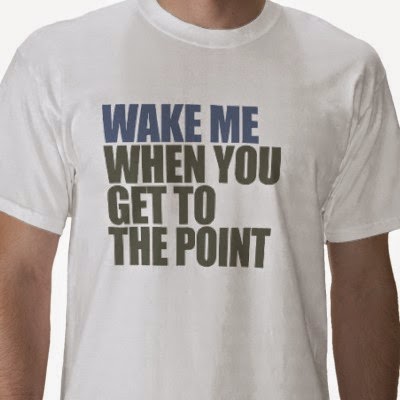 Maybe I overreacted and could have had just a little more patience. Maybe…but could you imagine if the sister had gotten a phone call during that conversation (and I don’t know that this didn’t happen) and I got the word-for-word phone conversation as part of the process of revealing what was in that damn wallet?

I’m usually a nice guy and can handle myself better than that, but everyone has a moment, and that was my moment. Perhaps I should apologize for what could only have been perceived as rude…but truth is truth, and some people just need to get to the point. 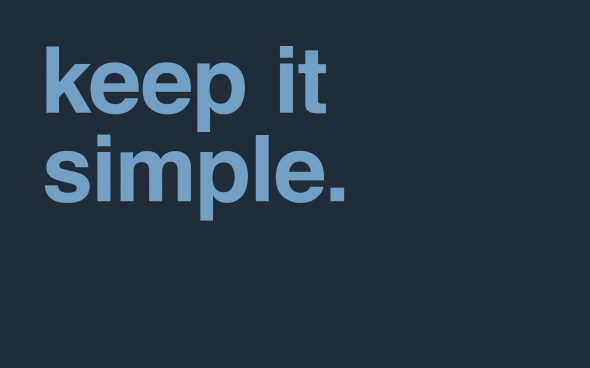 I guess next time I will politely interrupt and tell them there is a blog post they have to read and that it just can’t wait…then direct them here. If the title doesn’t do the trick and they actually read more into the post, at least it will stop the steady stream of useless information and give me a chance to unhook myself and reign in my curiosity.


The heck with that stupid wallet…I don’t care anymore.
Posted by Dennis Kreative Idea at 7:32 PM