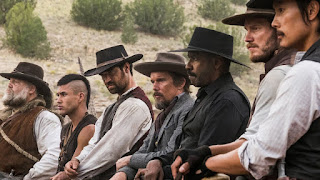 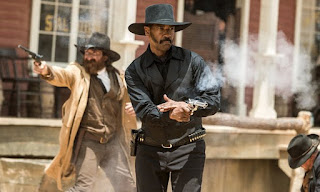 What can be said about the quality of Denzel’s acting that has not already been said? He seems to ignore his own age and continue to astound with quality acting giving what we all have come to expect from him exercising his craft. Taking the lead here is just another notch in his lengthy habit of meeting expectations. 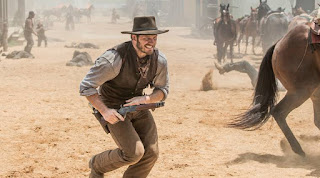 Chris Pratt put himself on the map with Guardians of the Galaxy and continues to deliver with each role he takes. This role is no exception as he mixes his style of comedic drama with the western genre to bring us Josh Faraday, a gambler that makes his own luck in a world decidedly unlucky. 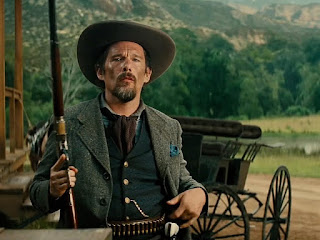 Ethan Hawke is Goodnight Robicheaux, a man with a past rooted in the Civil War that continues to define him as he tries to move on. Hawke plays this role well dangling the mystique of his character in front of us before delivering a very human affliction that brings the character full circle. 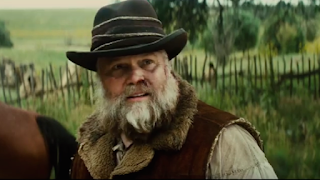 Vincent D’Onofrio is the frontier tracker Jack Horne and although he is a man of few words surrounded in mystery and fear, when he does speak it captures your attention to the exclusion of all else, showcasing why he is such a great actor. 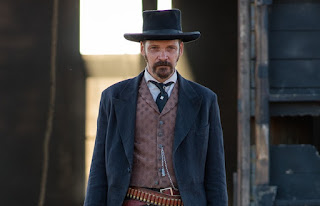 Peter Sarsgaard is the villainous Bartholomew Bogue, a role he seems born to play as he is very good at “bad.” Granted, it doesn’t take much to be the bad guy (one would think) but not everyone seems able to pull it off and the fact this film is a period piece just makes his brand of villain all the more interesting. 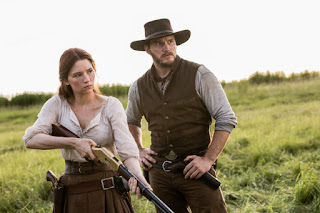 A small mining town is besieged by the nefarious intentions of Bogue to take over the mine and by extension, the town.  When his actions spurn the resistance of the townspeople getting one in particular killed, the wife of this brave soul (Haley Bennet) seeks justice…but will settle for revenge. 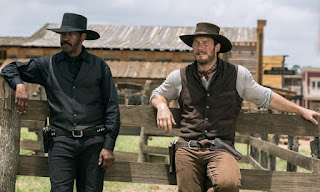 In her travels to find someone wiling and able to defend the town against Bogue, she happens across  a man named Chisolm (Washington). Unbeknownst to anyone, Chisolm not only has a past familiarity with Bogue, but after staunch persuasion, is willing to help the town . 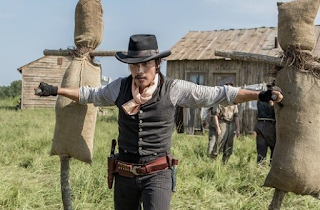 To help the town Chisolm needs the help of some very gifted men, the first of which he recruits is Faraday (Pratt).  Knowing exactly who he wants to recruit, he and Faraday set out to gather the rest of the “seven” with Faraday bringing in Robicheaux (along with his partner Billy Rocks…played by Byung-hun Lee) while Chisolm recruits Vazquez (Manuel Garcia-Rulfo). 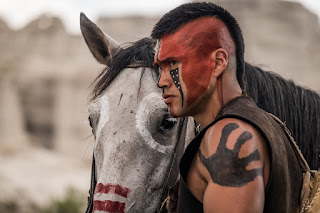 With five assembled, they actually fail initially to recruit Horne, but he soon comes around just in time for the recruiting of their last and unlikely member Red Harvest (Martin Sensmeier). With all seven assembled, it’s time to teach the town how to defend itself and ready it for the invasion of a small army.

What follows next is a magnificent display of  bullets, knives, death and mayhem…western style. 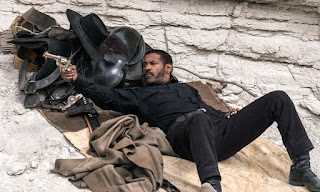 I don’t much remember the original (western) version of this film or the original samurai version so I was not burdened with watching this film while subconsciously making comparisons. I took in what was presented and found it to be a very entertaining  way to spend an afternoon. 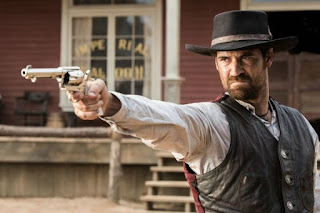 Although I kinda felt the assembling of the seven was a bit rushed, especially in the case of Red Harvest (like what really was his motivation to even join), I felt the characterizations of the different character’s personalities and how they interacted with each other really brought some depth to the film. 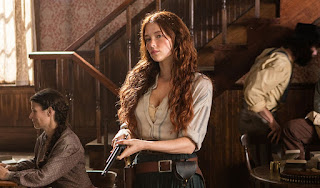 It was the classic formula of bad guy terrorizes town, town gest heroes to help, heroes s stop the bad guy. You really can’t mess that up…all you have to do is add your own flair and style to it and this film did that. 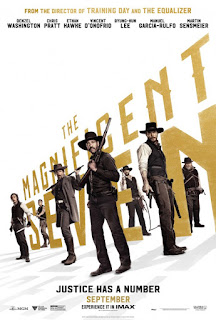 There were no Oscar performances here, but there was a lot a fun. It wasn’t the best film ever made, but it certainly wasn’t the worst film either. It did just what the formula it followed should have, with a few surprises here and there, and shot up three and a half (3.5) cinnamon sticks in my cup of tea.

Land of the Free (Politically Enslaved) 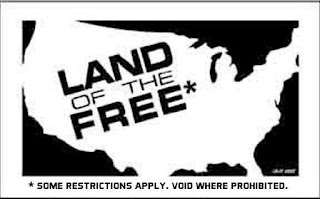 The “land of the free and home of the brave” is an expression associated with America, but have you ever stopped to wonder who the free and the brave really are? Freedom is a subjective term and bravery is more than putting yourself physically in the line of fire. When it comes to our political system, there is very little freedom and the brave are those that seek to challenge the status quo machine. 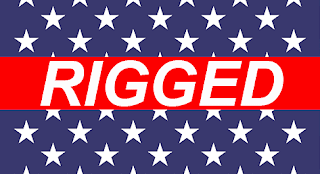 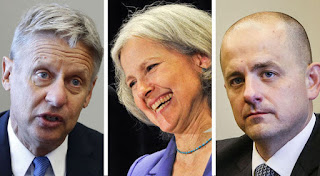 It’s absolutely sad to me when I try to have a political conversation with a friend…and they say things like “We only have two choices.” The sad part is not them saying that since they may honestly think that only two candidates are worthy of the office. The sad part is them believing that there are only two candidates to actually choose from. It’s tragic actually, when you consider this mindset is not happenstance, but by design. 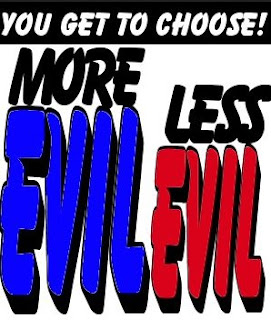 Even people that are aware that there are more choices often retort that a third party candidate has “no chance of winning, so why waste the vote?” Personally, I think the real wasted vote is one cast for a person you know is bad for the country but is the “lesser of two evils.” See, the lesser of two evils…is still evil.

Being a third party candidate is brave.

Neither the Democrats or Republicans want to lose votes to a third party candidate, so to be one means you have the financial and political power of these two entrenched machines gunning to shut you out of the process, and shut you down if you become a part of it. 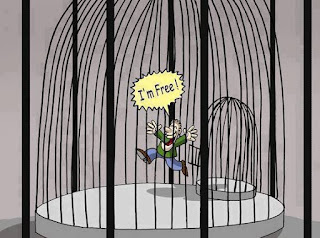 There is a monopoly on exposure and funds controlled by the Democrats and Republicans that is politically enslaving the citizens with the illusion of freedom. If we do not educate ourselves though, we, the people, are at fault for the calamity this process is bringing us.

There is a reason why we never see a third party candidate on the debate stage anymore and that reason is nicely summed up with this quote:

That’s right….the people that control who can debate on national television are sponsored by the very parties debating.

“The Commission on Presidential Debates (CPD) is an independent nonprofit corporation established in 1987 under the joint sponsorship of both the Democratic and Republican political parties in the United States.” 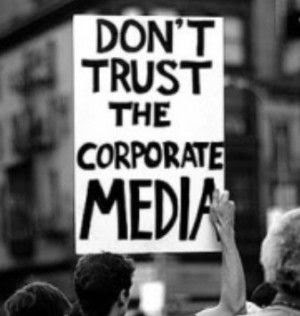 If you believe the political system is set the way it is to benefit the people, you are wrong. If you think the mainstream media is interested in exposing this travesty for your benefit, you are wrong.  So when a brave soul steps forward with a desire to help the country and serve the people, it’s no wonder you never hear about them. Those in power have only one desire…to remain in power. They learned a valuable lesson when they allowed an alternative to be heard:

“Over the intervening 28 years, there has been one commission-organized debate that included a third-party candidate: Ross Perot in 1992, with Bill Clinton and the senior Bush. That was allowed to occur because both parties thought Perot’s inclusion would ultimately help them, but that may have backfired, the suit contends: Perot’s public support nearly tripled after the debate, from 7 percent to 19 percent. 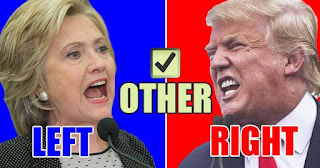 This particular election cycle is relevant to the subject since both candidates (Clinton and Trump) each have a national disapproval rating of over 60%. Imagine what would happen if all those people voted for an alternative candidate. 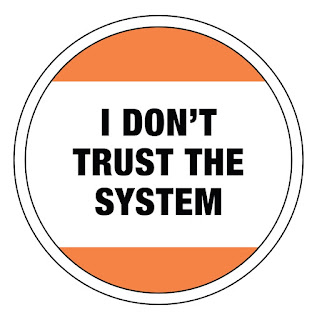 When you do the research into why things are the way they are you will understand why we live in the land of the free, but freedom is a subjective term because we are politically enslaved.