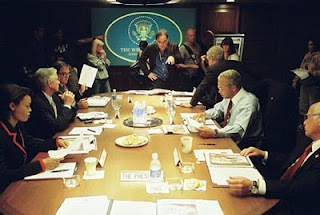 The Cast:
Josh Brolin, Jeffrey Wright, Thandie Newton, Scott Glenn, James Cromwell and Richard Dreyfuss.
Josh Brolin plays a superb George W. Bush without going over the top with a comedic impression. Jeffrey Wright does well as Colin Powell while Thandie Newton’s Condoleeza Rice just made me laugh every time she had screen time...and I’m sure it wasn’t her intention. Scott Glenn plays a very good Donald Rumsfeld and creates his own gravity with his intensity. The same can be said of Richard Dreyfuss as Dick Cheney, which is no surprise considering the excellent body of work he has done. James Cromwell plays George H.W. Bush and does an adequate rendition of the 41st President.
The Plot:
This biographical take on the 43rd President starts with his early days in college and follows through to his 2004 re-election campaign. Along the way there are glimpses into his military service, governorship of Texas and bid for the Presidency in 2000. The main story settles with his first four years in office and it’s from here that all other glimpses spin from. 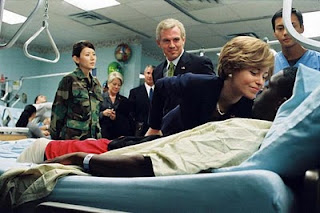 During his first term, the decisions and thought process are explored from an insider point of view and we are treated to, seemingly, be on the inside with the Presidential cabinet as they weigh decisions and plan the course of the country.
Made during his first term in office, the film culminates with the 2004 re-election campaign and ends leaving us to ponder the rest of the process that carried on through the next four years of his Presidency.
The Verdict:
Although meant to be a biographical movie, there is very little in the way of accuracy verification that the viewer can do...so it is as much an entertainment presentation, probably more so, than an accurate historical account. 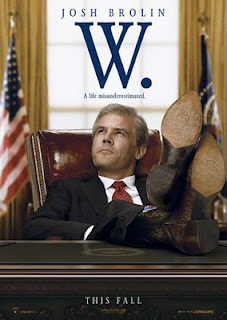 Josh Brolin is excellent as the 43rd President and captures much of what we’ve been able to observe from real life events. The presentation of the subject is mildly entertaining and even with no measure for accuracy, is very thought provoking. Jeffrey Wright raises eyebrows, not so much from his performance...which was very good, but from the idea that Colin Powell was the only voice of reason making all else, by comparison, seem like insanity.
Oliver Stone is well known for making films that provoke thought and tug on the conspiring strings of truth versus conjecture...this film is no different in that approach. The best part of the experience isn’t even in the film, it’s a segment on the dvd called “Dangerous Dynasty: The Bush Legacy”...and it’s fascinating enough to give this movie two and a half cinnamon sticks, out of five, in my cup of tea.
Posted by Dennis Kreative Idea at 10:41 PM No comments: 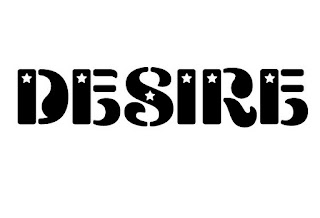 Whatever the reason is for why the desire or love remains unfulfilled, the fact remains that feelings of desire will happen...to everyone. The study of human relationships and sexual desires is ongoing with the only fact of it being that it happens to all of us, naturally...and thus there is nobody to blame.
Could the song simply be about sex...? Is it really necessary to assign a deeper meaning of love...? Both can go together, but can also exist separately. The line “We want everyone” is what led me down this particular rabbit hole since, at least from the male perspective, sex is a paramount desire more frequented than love that could be applied to “everyone.”

In truth, this song raises more questions than it answers and they aren’t new ones...they are very old. I wrote this post, as something that departs from whatever my “norm” is because recently this issue keeps being raised...so I will raise it. Love and relationships can be polarizing subjects like religion and politics...but no matter how much we avoid them, they have to be discussed at some point. So...let the discussion begin.


Should we be victims of our desires...suppressing our internal callings...? Or masters of them...embracing that which we want most...? Simple questions with complicated answers that we all must ponder as we navigate the vast ocean of life.

I’ve added an alternate live video version of the song...simply because I’m a huge fan of the piano. Enjoy.

Madness From the Bench 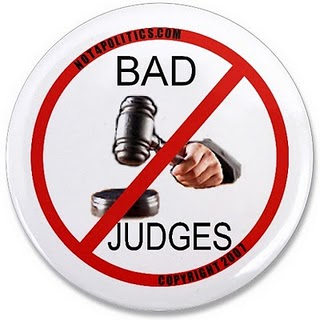 I never cease to be amazed by human behavior. I don’t mind amazement, but when it comes at the expense of common sense, it tends to sting a bit. This stinging sensation seems to happen quite a bit in our legal system, particularly when it comes from the bench the judge sits on.

We look at judges to be the fair arbitrator of our disagreements in accordance to the letter of the law. How quickly we forget or abruptly we are reminded...that a judge is not some computer program or supernatural being, but very much human. They are exactly like those they pass judgement over, complete with all the flaws and problems that plague all of humanity. I don’t have an issue with that...I mean, really...what is the alternative? A computer without human compassion or capacity for emotion? I would rather not travel that road if at all possible.

So, I can’t knock judges for being human, what else are they going to be? My issue is when  they abandon common sense for madness and smash the gavel on it. There should be some sort of process for dealing with judges that habitually do this...and by “process” I mean something quick, immediate and effective for correcting decisions clearly without enough common sense to make change. All jokes aside, people’s lives are being ruined by the ineptness of those we trust to fairly apply the law. 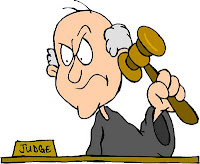 I’ve personally never had to go before a judge that thought common sense was a crime...but I personally know people that have. Recently a close friend went before a judge for an ongoing situation with visitation rights. Quite simply, he wants to be a bigger part of his child’s life, and wants his child to be a part of his. A man with absolutely no criminal history, no history of abuse on anyone...he even has great credit, was lambasted by the judge for failure to fill his visitation obligation for two years.

I don’t know what your thinking...but if you’re a regular reader of this blog, you know the twist is about to drop. He hasn’t had a visitation with his son for two years...because he had been deployed to Iraq to fight for his country...for two years. The judge, in all her wisdom, retorted that his reason was absolutely no excuse at all for missing his visits. Huh..? Excuse me..? No excuse...? He’s fighting for the right for this judge to be a complete simpleton and that doesn’t explain adequately why he never made his required visitation? 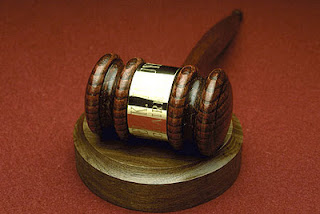 Never mind the fact that he went before the court to amend the visitation schedule now that he is back, so that he could spend MORE time with his son...but shame on him for not telling the insurgents to stop shooting at him so he could go AWOL and see his son.

Forgive my sarcasm, it’s a coping mechanism...but this is the sort of thinking that defies logic. That a judge would dismiss his active service as if he were simply sitting home on the couch in front of a television is reprehensible...and you can consider me thoroughly disgusted.

As I said, I can’t knock judges for being human...but I’m all over them for being nonsensical, and dispensing madness from a bench that we go before to receive reasonable judgments under the law. Take a moment, please, to visit the links below...and help put a stop to the madness.

UPDATE:
The madness continues as a judge has ordered a child renamed because of her personal beliefs !! When will there be some oversight for a judge that breaches their duty? 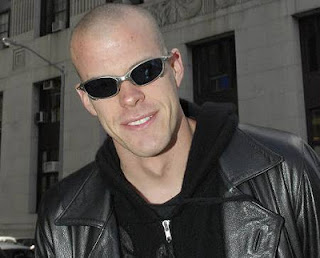 I have recently become aware of a man by the name of Jeb Corliss. A friend posted a video of him in a facebook group...and I was astounded, and inspired. Jeb Corliss is a professional BASE jumper, skydiver, and wingsuit flyer. The video below, to me, is amazing. If a picture is worth a thousand words, then this video is worth a million words...literally. It has over four million hits and although I can’t speak for anyone else, I will share why I have viewed it numerous times. 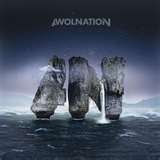 The short answer is that it’s a great video. It’s well filmed and the music compliments the visuals. The music is by a group called Awolnation performing a song entitled “Sail.” I had never heard of them before this...but I’m glad I know now. There is a scene shown from multiple camera angles to capture the effect and shear awe of what Corliss has done...and it does just that. Everyone I show this video to has the same response during this segment. Don’t worry, your response will be the response I’m talking about.

It’s not until the very end of the flight that the bigger picture dawned on me that led to the inspiration to write this post. It’s very subtle but very revealing as well...and it’s the look on Corliss’s face after he takes his helmet off...a look of pure joy. In that instant, the joy of life is evident even though it was already conveyed when he flew threw the crack...and you were struck with awe. 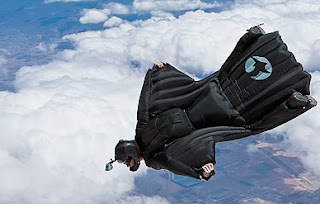 Jeb is doing what he loves to do. He is embracing the joy of life in his unique way, and sharing that with the rest of us...and it’s addictive. It’s also a perfect example to follow. I’m not talking about jumping off cliffs in a wingsuit, although many reading this will want to do just that. I’m talking about finding whatever it is that brings you the joy of life and embracing it with every moment you’re able to.
Corliss is getting in touch with that child that wanted to fly, and taking him on a journey of pure bliss. The inner child for many has grown, but the journey of pure bliss is never an outdated travel plan...and everyone should take it as often as possible. I don’t think it’s about how you lived or why you died, but instead about what you took from embracing each moment and the gift that others received from that embrace. 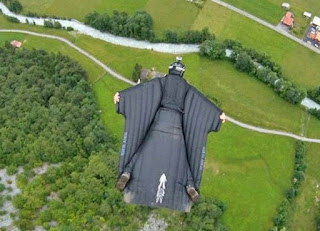 Thank you Mr. Corliss...your embrace of the joy of life has reminded me that the daily struggle is not the totality of the moments offered, and inspired me to remind others that the true potential within each moment can translate into a life of joy...where we can experience the joy of life.
http://en.wikipedia.org/wiki/Wingsuit_flying