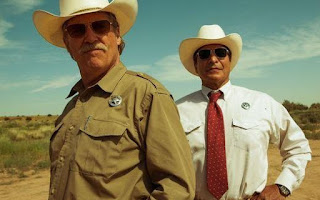 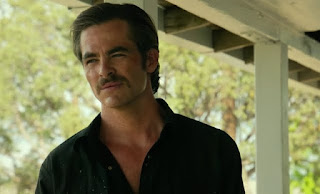 Chris Pine plays Toby Howard, half of a desperate duo that sees no other option to save their family ranch than robbing the very bank that is foreclosing on the ranch. Pine does an excellent job of portraying a man that, although he is desperate, still tries to make his gains with a minimum of problems and no casualties if he can help it. 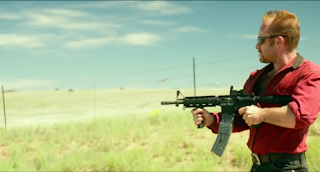 Ben Foster plays Tanner Howard, the other half of this desperate duo. Being an unstable ex-con, it’s likely he would have robbed the banks anyway without having to be motivated by saving the ranch and helping his brother. Foster plays this role well and excellently conveys a man with a lot less empathy than his brother, while having quite a bit for his brother. 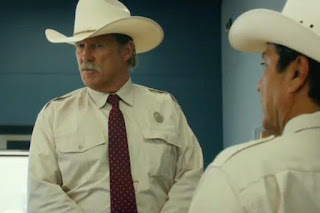 Jeff Bridges is one of my favorite actors that only seems to get better over time. In this film he plays Texas Ranger, Marcus Hamilton, slated for mandatory retirement. Bridges executes the role of a man not ready to hang his hat up perfectly. Further, he nails the crotchety, ball-busting ranger raining constant racial zingers at his partner Alberto Parker (Gil Birmingham) stemming from a deep affection and respect. 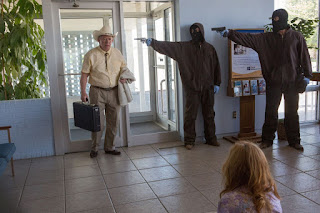 Two brothers in West Texas are in need of $40,000 owed to the Texas Midlands Bank from a reverse mortgage their mother took out before her death from cancer. If they cannot raise the money in a week, the bank will foreclose and take the ranch. One brother, Toby took care of his mother and tended to her until her death. Bring divorced and having two children and no job, he is desperate to save the family ranch from being taken by the bank. 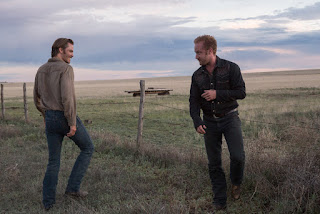 Tanner is an ex-con (sent to prison for killing his abusive father) that is all too happy to help his brother Toby save the family ranch and is exuberant to be robbing the very bank that is trying to take the ranch. As both brothers rob their way across Texas, they draw the attention of a particular Texas Ranger slated for mandatory retirement that sees solving the robberies as a perfect way to end his career. 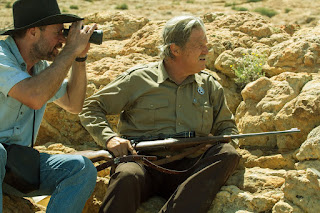 As the brothers continue their spree, Texas Ranger Hamilton begins to put the pieces together from the evidence and witness testimony. It’s not long before he has profiled them good enough to begin closing in on them, knowing he has to catch them soon since the evidence points to them trying to raise a certain amount. Just as he deduces the next branch they will rob, and on his way there, the brothers rob said branch…but end up getting into a massive shoot out with customers and townsfolk (the right to bare arms is real). 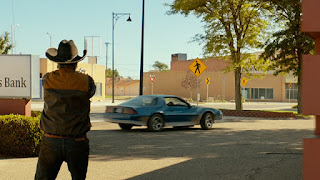 What happens next is the culmination of an extensive investigation and financial desperation coming together in a hail of bullets and bodies that will leave everyone involved, changed forever. 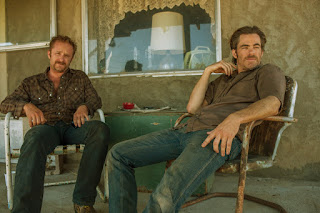 This film is simply excellent. There is much action throughout the movie but that just serves to further the story as it is a story-driven film with an excellent cast and flowing script. From the beginning of the film it’s clear that the ride is going to be a good one as it jumps right into the first robbery. The banter between the brothers is great and the reactions of the employee is probably about as “Texan” as you can get (I’m guessing since I’m not from Texas). 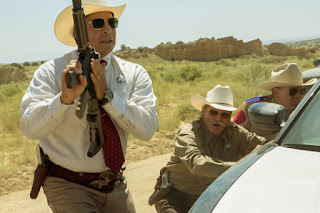 Although the film tries (and successfully) to give the feel that it’s just the little guys standing up to corporate greed, if you take a closer look, you really see a bunch of crazy guys robbing banks for money they probably could have gotten legally and easily (since oil was found on the ranch). The film does a great job of never allowing you to look closer as it draws you into the world of both these brothers, and the retiring ranger…and has you thinking the bank is sticking it to them just to get the oil. 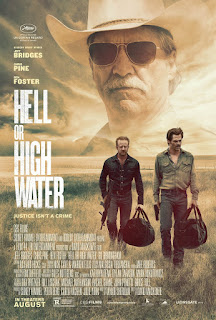 The camaraderie between the rangers is also effective and fun. It’s just as important and relevant as the relationship is between the brothers. I’m not sure if everyone will understand (at first) that all the racial jokes Hamilton makes about Parker is simply his way of showing affection and does not stem from any malice…but indeed reveals how they have bonded over the years.

This film has it all….drama, comedy, and action and with an excellent cast executing the story, it’s no surprise this is one of the best films to come out this year easily robbing four (4), out of five, cinnamon sticks from my cup of tea. 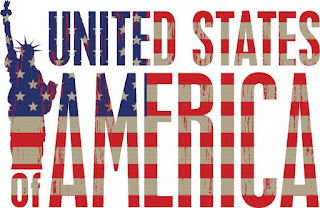 That is the simple answer to that inquiry, but where many want to put a period, there should probably be a comma. Yes, America is great and there is no place else I’d rather live. Does that mean America is perfect? No. Of course there is room for improvement. Of course we can reach greater heights and continually become better than we are. Not only can we do this, but we absolutely should do this….we are, after all, America!

Why should any of this even be a question? 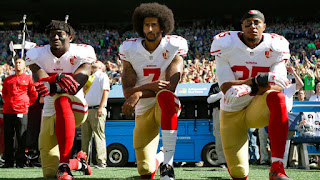 Well…current events are bringing the character of America to the forefront. Colin Kaepernick has, by his refusal to stand for the national anthem, brought the issue of police brutality against minorities (really, in general) to the forefront of a discussion that was formerly not even being had. The seemingly daily incidents of black people being killed by police is being injected into the leisure time of many (as this is being talked about on various sports outlets), and the backlash is very telling. 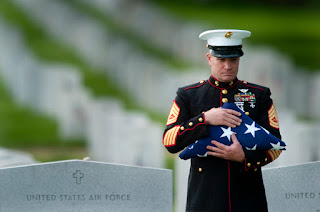 I’m personally stunned at all the attention Kaepernick himself is getting instead of the reason why he has chosen to bring such attention to himself. Many are offended by his refusal to stand for the anthem citing his disrespect for the country, veterans (although there are many that support his position), and police. Few of these same people seem to have any outrage when a black man is killed with his hands up while not in the process of committing a crime.

So…it seems the way many in America are choosing to deal with all this is to simply change the subject. Obviously it all just goes away if you ignore it…except, it really doesn’t…and you really can’t. 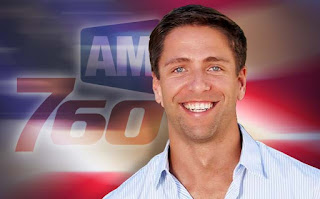 The backlash has been visceral…all over the national anthem. 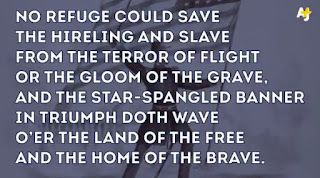 Well, Kaepernick’s protest has even brought the anthem itself into the discussion and much of what has been revealed is astounding. Forget the fact it was written by a slaveowner and the third stanza actually talks about killing runaway slaves, let’s talk about how it even came to be a part of the NFL ritual as observed today. 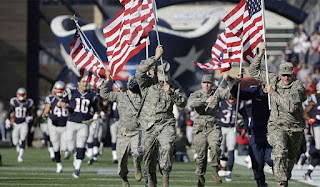 Until 2009 no players stood for the anthem because no players were even on the field when it was being played. They were moved to the field as a marketing scheme (yes, scheme) to make them look more patriotic, as the US Department of Defense and the US National Guard paid the NFL more than $10 million (combined) between 2011 and 2015 to stage on-field patriotic ceremonies as part of a military recruitment budget line item (#paidpatriotism). 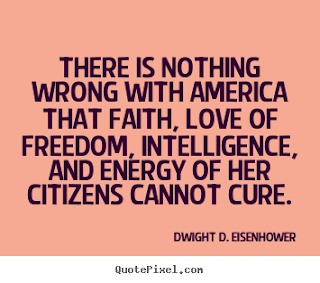 America is great, but it is not flawless…and we do not have to simply accept the flaws when the very identity of being an American means we strive to correct them. There is a segment of the nation that doesn’t want correction, they simply want to bask in a false image of a “perfect” country and lambaste anyone that interrupts that image with reality. They care more about what Kaepernick is doing than why he is doing it. They are more outraged by their perceived disrespect of our flag, than the blatant civil violations of the citizens that flag represents.

I have faith that America will move forward despite these people wanting to hold it back. It’s what America has always done and must continue to do if being “great” is going to continue to be a statement instead of a question.

https://twitter.com/hashtag/paidpatriotism
Posted by Dennis Kreative Idea at 12:32 AM No comments: