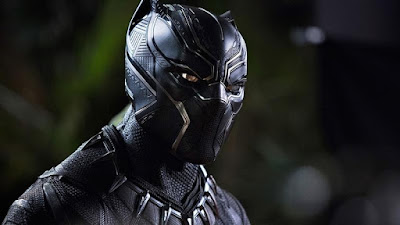 There has been a lot of hype about the release of Marvel Studio’s Black Panther film. Much of it has been positive, but some has been in the form of controversy…which is nothing new when discussing T’Challa and the ways of Wakanda. Black Panther was the first black super hero to appear in comics, and although he debuted onscreen in 2016 in “Captain America 3: Civil War”, his solo film is the first major superhero film to boast a mostly all black cast (I say “major” because in comparison, “Meteor Man” was minor, albeit enjoyable).

Some see this as significant given the level of success the film has had thus far as it breaks and sets box office records. Others see it as highlighting real issues with Black America…that they will come out in droves to see a film, but not to vote (although I would love to see some concrete numbers on this instead of percentages). Then there are those screaming foul on the film because it has a mostly black cast, citing “reverse” racism.

If you haven’t seen the movie and plan to, you might want to stop reading now before some spoilers drop. 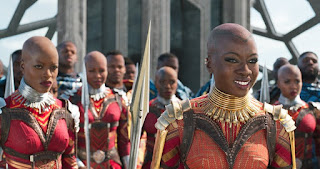 There are also those crying foul because the film was not the first Marvel Studios film to showcase LGBT characters in a major way (this has yet to be done onscreen by Marvel, but was expected by some since the current iteration of the comic portrays the Dora Milaje as lesbian).

If you’re into the Marvel Cinematic Universe, you’re going to like this film. Heck, it’s entertaining as a film regardless of its affiliation to the MCU. That said, if you take a closer look, you will find much more to the film than special effects and CGI. 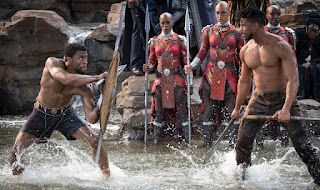 For example… the struggle between T’Challa and Killmonger can be seen as not just a microcosm of black-on-black violence, but the continual breakdown of the black family since these characters are blood relatives. A point further driven home when we learn that T’Challa’s father killed his own brother, making Killmonger an orphan early on. T’Chaka leaves his nephew in America (the abandonment of the black man on his children), a victim of whatever the system will produce (in this case another angry black radical…or liberator of his people, depending on the lens you choose to look through). Not to mention reinforcing the fallacious generalization, but sometimes true point, that black Americans cannot be in harmony with Africans.

Of course much of that is overlooked when the film continuously tries to reinforce the empowering of black people (Wakandans), even as the story is about stopping Killmonger from trying to do the very same on a global scale, albeit not the Wakandan way (but the American way).

As we keep tunneling down this rabbit hole we eventually come to Everett Ross, one of only two non-black major characters…and a CIA operative (and all that such a job implies), that is given the awesome responsibility of helping to save Wakanda (insert America to the rescue in the form of a great white hope) from an angry radical black man that would likely kneel for the anthem (I couldn’t help myself). 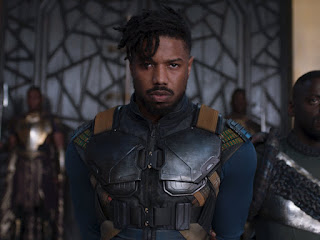 Killmonger is right. His methodology is questionable (and some will say flat out wrong, while saying the same methodology used by America is right), but his position that Wakanda should have been doing more to help other black people around the world is right. The film itself makes this point and shows T’Challa buy up the area in Oakland where Killmonger grew up with plans to open a Wakandan outreach program to help uplift the community (a nod to the real-life Black Panther organization). 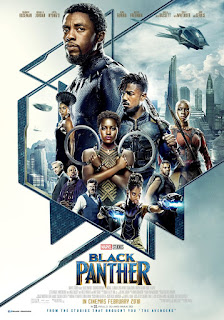 Of course Killmonger has let his own personal pain and agenda trump the cause, as evident by his burning the heart-shaped herb, proof he doesn’t have any vision or care beyond his own reign as king (or perhaps he simply is not vested in the welfare of Wakanda specifically, beyond their use to achieve his goals). Either way, power to the people has given way to absolute power to Killmonger. While it can be argued that Killmonger is a lost soul, it can also be argued that the Wakandans are a lost people…and the actions of Killmonger have found them, to the benefit of not just black Americans, but the entire world.

Go see the movie…and even though it is much more profound than I have presented here (and thankfully it takes from all the Panther lore, not just the current iteration), it is an enjoyable experience regardless of how deeply you choose (or not) to look at it. 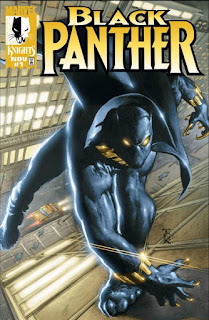 Now let’s tackle the book…from which everything stems, and understand the Wakandan way. My first experience with this material came in the 70’s from Don McGregor (Jungle Action). My childhood was enriched by these stories and they were the foundation for my love of the character of T’Challa. Along the way of reading over the years, the lore has been further enriched by Reginald Hudin and Jason Aaron.

Of course we can not have a valid discussion of the subject without talking about the absolute best run of Black Panther as written by Christopher Priest. If anyone is interested in truly understanding the character and what the Wakandan way is all about, read everything by Priest…and be welcomed into a truly wonderful place (his imagination as it expanded upon the established lore).

Unfortunately, the conversation does not end with discussing the best writer (and I would love to stop here). We have to discuss the worst as well, as written by Ta-nehisi Coates. Coates never understood the material, so it doesn’t matter what accolades he has as a writer, when you don’t “get it”…it shows. 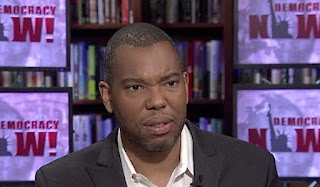 Coates was so blunt to the material that he thought the Dora Milaje were simply accessories to T’Challa who were just an extension of his arsenal (he could he not understand the position to be one of the most honored in their society, akin to how a patriotic soldier might see the assignment of being the President’s personal Secret Service attachment and therefore didn’t understand how stupid it was for the Dora Milage to turn on their king). He didn’t understand why Wakanda was a monarchy (and subsequently made it into a democracy). He didn’t understand that T’Challa was a king first and foremost (and tried to make T’Challa into Spider-Man). All of these lapses of understanding (and more) contributed to the increasingly declining sales of the current book…and subsequent cancelations of the two spin-off books.

Long time Panther fans walked away from Coates, with good reason. Even Ben Shapiro didn’t like Coates’ iteration…which simply means Coates has run the table on his damaging the character, from long time hardcore fans all the way to filthy casuals. 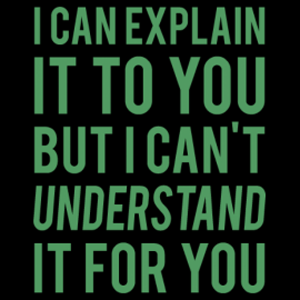 A great letter to Coates was published at the end of the 14th issue of his run that explained all this to him. In a nutshell, Coates was writing the book from a western philosophical mind set (or conditioning) and needed to write the book from a Wakandan mindset instead. His response citing “anti-colonial struggles in Africa” and not being able to write about democracy while excluding Nelson Mandela just highlights his disconnection to the material (and lack of understanding of the letter) since Wakanda was never a victim of colonialism, and thus doesn’t fit his references or reasonings for them having such a struggle for freedom and democracy.

Coates is a perfect example of the saying “I can explain it to you but I can’t understand it for you.” Hopefully Marvel wises up and understands that Coates might be better off elsewhere (and I don’t just mean adding Captain America to his plate) and instead gets someone who actually understands the character to bring the book back to greatness, back to the way of Wakanda.