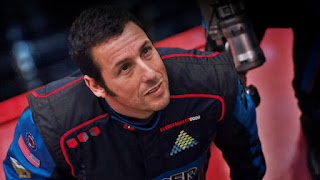 I am an ardent fan of the cinematic arts. Although I have certain genre preferences, I don’t let that stifle my curiosity and close myself to different flavors of entertainment. That said...I am a huge fan of science fiction, super hero and action movies! Even though this film falls within the sci-fi genre (even though it’s heavy on comedy), please visit my other blog The Boxed Office for reviews, exclusively, on these types of movies. 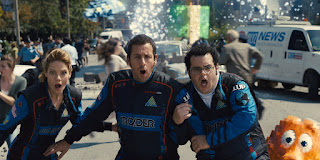 Adam Sandler is struggling for relevance. In this film plays Brenner, a man who apexed in his teen years on video games, but now is nothing but mundane. Sandler is good at mundane, as his career has certainly prepared him for the role. 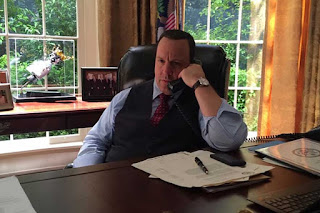 Kevin James is Cooper, a childhood friend of Brenner that has now become the President of the United States. As cool as that is, he still has close ties to is buddy which conveniently plays into the plot. 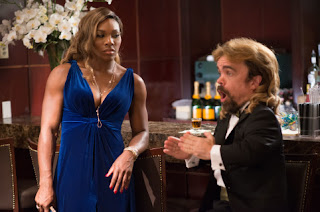 Peter Dinklage is Eddie, another former gamer from the 80’s who encapsulates the “bad boy” role in the film. His life has taken him on a path to prison , and it’s no surprise we learn later he was a cheater back in the day.

Josh Gad is Ludlow, another friend of Brenner and Cooper and former gamer. Of all the characters, I think the film was most kind to him. None of these roles goes any deeper than what I have just described so there really isn’t much to say about the “acting” in this film and the direction and script aren’t much better. 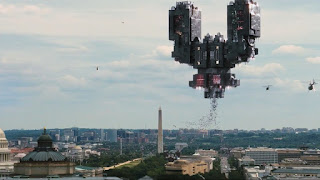 Back in the eighties, Brenner, Cooper, Ludlow, and Eddie were all video game gurus. The teenage years were the best and life couldn’t get any better. At the same time, video feeds being sent into space of these game is interpreted by an alien race as a declaration of war….which they respond to in the modern era with renditions of the game characters that spread chaos, turmoil and death.

Of course the logical response to this is to assemble all the former video game greats and outfit them with super military tech so they can save the planet by fighting the alien’s game armada on the designated terms (ala classic video game rules).

What happens next is a jumble of silliness wrapped up in special effects and sprinkled with one-liners. 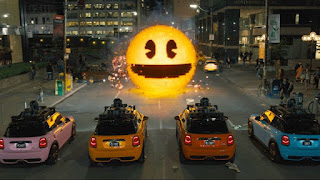 It’s easy to pinpoint what has made this film suck…a bad script, and Adam Sandler. I don’t know if sander can do better, all I know is that he didn’t. I found it pathetic that he would have to chase past glory by using the same voice from “Happy Gilmore “ to say "Somebody's more important" in the tone of "Somebody's closer”. Perhaps Sandler should abandon comedy films altogether and try his hand at some serious roles. It worked for Vince Vaughn. 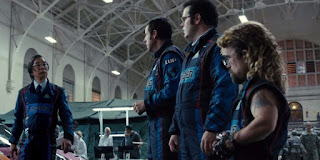 Kevin James and Peter Dinklage can do better…much better. Dinklage is a bonafide star and I can’t even begin to fathom why he would appear in this film. James has had recent “success” with the “Paul Blart” films, so again, he really didn’t need the low point this film created for him. 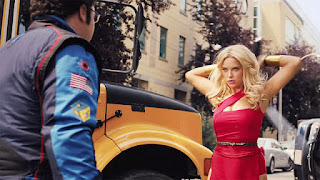 The idea of aliens using video game pixels to destroy Earth is already borderline dumb, but when the film can’t figure out if it wants to be a comedy or a science-fiction film, the only people that lose is the audience. If it had been genuinely funny (which it wasn’t) instead of just dumb, it might have been worth the time spent watching it. 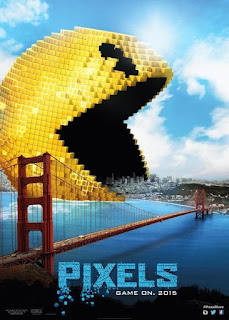 The only redeeming quality of this film is the special effects…and they really aren’t that special. Perhaps if they took a more serious tone with them, they might have elevated the film more. Instead I had to settle for a few good lines from Josh Gad…a few choice peeks at Ashley Benson. Unfortunately, those high points were not enough to blast more than one and a half cinnamon sticks, in my cup of tea.

Posted by Dennis Kreative Idea at 7:14 PM No comments:

The Conditioning of Mr. Know-It-All 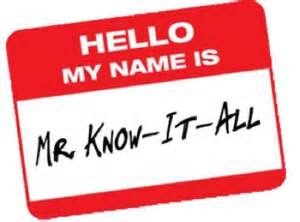 So…there I was wondering about what I would talk about this month. I was scouring my brain for recent experiences and lessons learned for discussing, when life simply presented me with the content I was looking for. It’s wonderful how things fall into place and all you have to do is be open and aware to capture the opportunity. 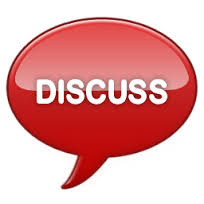 Let me start off by saying that there is a good chance we all know someone that thinks they have all the answers, or knows everything there is to know (no matter how illogical such a fallacy is presented). We also probably know someone, or are ourselves, so conditioned in a certain circumstance as to be unwavering in our routine, even when it’s completely appropriate to do so. All that said, I’m not really writing this to tear anyone down, but if a careful observation of this experience can help us to look at ourselves in hopes of preventing similar acts, then I think it’s worth discussing. 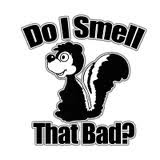 Yesterday I was at work talking with a co-worker when they mentioned that their dog had been skunked while taking his 5 am walk. I remarked how it must have been a process cleaning his four legged companion before coming to work (work does not start until 8 am….but the culture of the job sees a majority of the members arrive no later than 7:30 am). He replied that he had not yet cleaned his dog and that he had left the dog outside until his return home the next day. 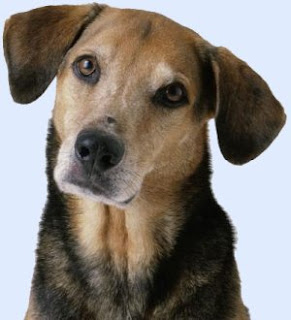 I mentioned an option of cleaning his dog and arriving at work by 7:30 am, a two and a half hour window to deal with the issue. He wasn’t hearing it…since he was in the habit of arriving at work at 6 and viewed arriving at 7:30 am as being “late.” But…what about the dog? 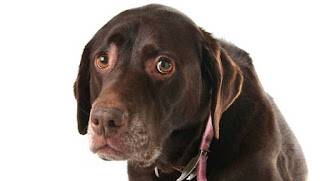 See…he explained to me his history on the job and how he felt he had to present himself, and so ingrained was this passive indoctrination that he could not fathom any deviation from this routine, even for the most unique and extenuating circumstances. But…what about the dog? 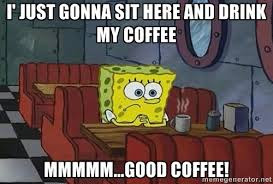 I thought maybe it was me. Perhaps I was not getting the wisdom of his decision, so I asked other co-workers, both dog owners and non-dog owners and all of them said they would have cleaned the dog prior to coming to work. Needless to say, this conversation expanded as word spread and the number of people inquiring with concern and disdain increased. I don’t know if any  impact was made on the conditioning of a man that thinks it reasonable to leave a dog skunked for twenty-four hours just to arrive at work two hours early…and drink coffee. 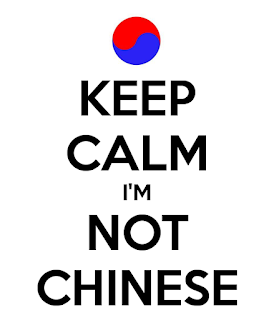 As if that wasn’t bad enough, this same co-worker decided my assertion that my genetic makeup did not include Chinese was actually a debatable subject. Logically, I expected him to ask me how I knew such things, but instead he just kept asserting that I did not know…until I told him I’ve had DNA testing. You’d expect such a revelation to end the debate, but when you know it all, the only real end can be that you are right…even when you are wrong.

Of course…such a humbling did not stop him from making another assertion later on at dinner that I had Italian sausage on my plate, even though I assured him it wasn’t and it’s a well know fact throughout my job that I don’t eat meat.

“I know Italian sausage when I see it” 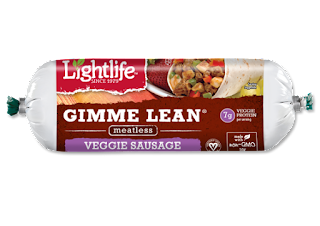 Apparently not…as it is Lightlife Gimme Lean meatless veggie sausage (and tastes oh so good). Seriously though, you can’t make this stuff up and the twist is that he is an older man you would think is given to careful contemplation through wisdom…but age does to equal wisdom, and thinking you have the answers does not equal contemplation.

Learning is a life-long process…and ignorance is ultimately willful.
Posted by Dennis Kreative Idea at 10:26 PM No comments: