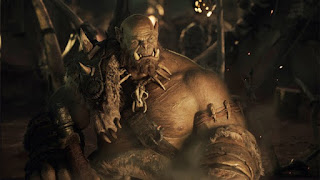 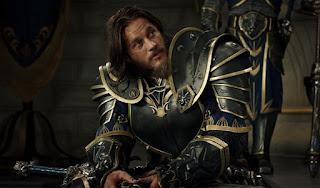 I am a fan of Travis Fimmel as I am an avid watcher of the show “Vikings” on television. Watching him in this film was fun, although for me I kept seeing elements of his other character and had to wonder if it was just “him” coming through in both roles. That said, he did a great job as Anduin Lothar (one of the greatest warriors in Warcraft lore) and proved he can carry a film as well as a television series. 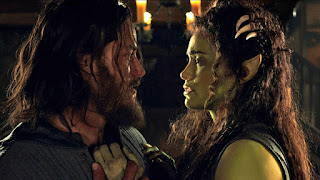 Paula Patton was Garona, a half-orc character torn between her Orc roots and her human sympathies. She did a great job in the role and wasn’t unpleasant to look at despite having some characteristics of Orcs. The chemistry between her and Lothar was evident and played well as a subplot. 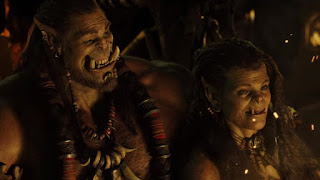 Toby Kebbell was the main Orc lead in the film, Durotan, and although it was motion capture and voice acting, made a lasting impression with the role. Although the Orcs are the “bad guys” in the film, I never got that sense from this character, indeed, Kebbell made a valid connection when I began to actually care about his character. 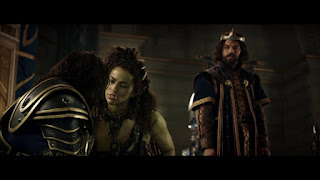 The Orc Horde has destroyed all their enemies and now have to flee their dying world in search of a new home. That new home is the realm of men known as Azeroth, a place of peace and beauty. Led by the machinations of an Orc shaman named Gul’dan, a portal is opened connecting the two realms allowing the Orcs to invade.

After the Orcs arrive and begin their rampage of death and destruction, and effort to stop them is made and requires the help of the Last Guardian, Medivh, (played by Ben Foster) a human shaman dabbling with powers beyond his control, unbeknownst to anyone. 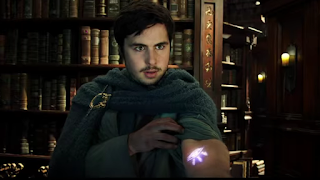 As the humans and Orcs clash, a young wizard named Khadgar (played by Ben Schnetzer) starts to put some pieces together about how and why the Orcs were allowed entry into the realm Azeroth and possibly how to stop them. What follows is a story of love, tragedy, and sacrifice set in the middle of spectacular effects and action, and delivered on the end of a blade. 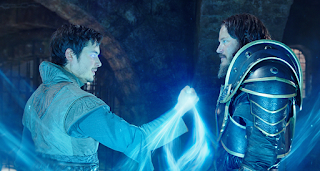 So…I saw this film in 4D. Nadine not familiar with 4D needs to now it incorporates 3D, then adds in tactile and sensory effects for a full immersion experience into the film. I like the medium, although truthfully, had I known to the extent I was going to be immersed into this film, I might have chosen another for the 4D experience. I can tell you that Orcs smell really, really, really bad. I must have been sprayed at least ten times (really, every time someone got their head caved in, there was splatter all over me). The chairs rumbled, poked, elevated, and descended along with the film. It was truly a fun time. That said…there was a woman sitting next to me that absolutely hated the experience and next to her was a man with his young child (about 6 years old) that had to leave halfway through the film. So, 4D isn’t for everyone and I suggest you wrap your brain around what 4D is all about before you decide to venture into this new territory. 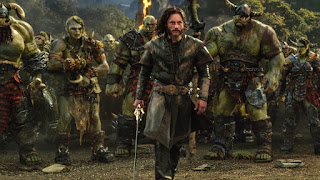 This film was a lot of fun. I think even without the 4D experience, this would still have been a great film as it had an interesting story that was presented from two opposing points of view to give the viewer a balanced perspective. 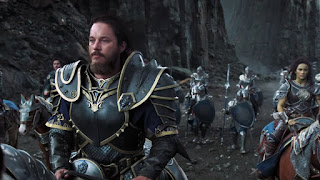 The good guys were to all good and the bad guys were not all bad, and that kinda is  how it is in real life since people are flawed (and apparently some Orcs are honorable). I think it was an excellent idea to push this point in the film as it created a connection between the audience and key characters, regardless of their race. 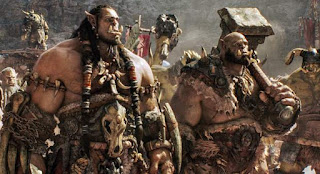 The special effects were awesome. Just as a regular film, the CGI and cinematography was excellent. Add in 3D and the effects are brought to another level. Add in 4D and the experience is unparalleled. I felt like the Orcs were real. They looked real, they acted and reacted like real living and intelligent beings. They even smelled unique. This film kept up the special effects standard I’ve me to expect from current film technology…then raised the bar. 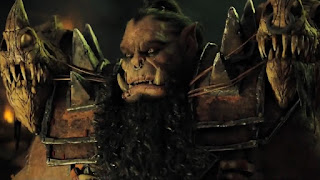 Just when I thought it couldn’t get any better…I heard the unmistakable voice of one of my favorite actors playing the key role of Blackhand, the Orc Warchief of the Horde. of course…I’m talking about none other than Clancy Brown! 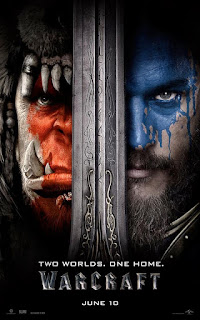 This film was fun and engaging and was easily a 3.5 on my scale, but honesty….when you take in the whole 4D experience, despite the foul smell of the Orcs and constant splattering of brains, it bumped itself to four (4) cinnamon sticks in my cup of tea (which I would not be drinking during this film).

Posted by Dennis Kreative Idea at 2:51 AM No comments: 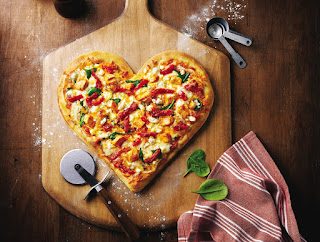 If you’re like me you love to eat good food. If you’re like me, you also like to eat some bad food every now and then…heh. Now without causing a debate on wether pizza is good or bad (it can be either depending on the pizza), if you’re like me…you absolutely love pizza! That said, I think there is an overabundance of pizza places and despite my love for it, have to ask…isn’t there enough pizza?

I was thinking the other day about all the great places I have eaten at in the past and realize many of them are no longer around. worse than that, some of them have been replaced by pizza places. Obviously I have no objection to eating pizza, however when a great place that made great food is replaced with…pizza, I think there is something fundamentally wrong with the universe. 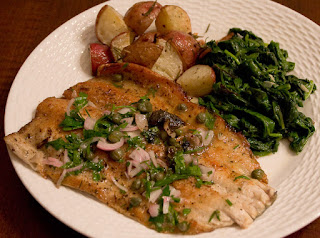 I used to go to Bennington VT. every year for a weekend to get away from the grind city life makes you engage in, and in that quaint little town there used to be a place called Alldays and Onions. It was at the restaurant that I was introduced to pan-seared trout. It was one of the absolute best dishes I have ever had, so much so that I began to make it at home. You can imagine my disappointment upon a return to Bennington years later to find out that I would not be having pan-seared trout, but instead could order a…pizza. I travel to the Cape (Cape Cod for those not in the know) often now, especially in the summer to go fishing. Before I fancied myself a Gorton’s fisherman, my travels to the area were sporadic at best….until I discovered a place called KK Codders in Falmouth MA. The fish was so good, I would make trips all the way there just to get a bucket of fried fish. Can you imagine taking a drive for nearly an hour with your mouth watering for the food that awaits you at the end of your journey? So…you can imagine my disappointment one day when I called down there to get the operating hours (it would suck to drive all that way and they weren’t even open) and the person that answered the phone told me that the restaurant is now a….pizza place. 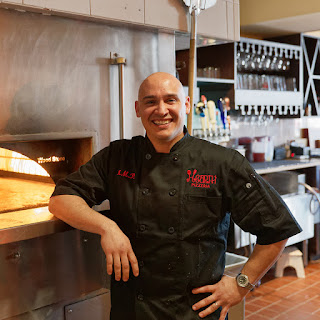 Ok…I know some fabulous places to get pizza and in the defense of Bennington, it’s a small town and probably didn’t have a pizza place…and in defense of the Cape, it’s on the water and there are a LOT of places that sell seafood so somebody probably thought it was genius to stop competing in that arena and go the pizza route, but man…I miss that pan-seared trout and bucket of fried fish!

http://celiaccorner.com/celiac-gluten-free-blog/hearth-pizzeria-opens-in-needham-center-ma-organic-gluten-free-and-vegan-menu-options-available/#.V3G0O7TZQ4s
Posted by Dennis Kreative Idea at 7:20 PM No comments: