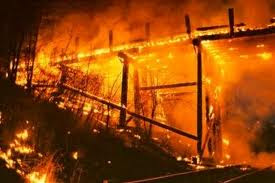 Have you ever witnessed the destruction of a bridge being engulfed by fire? The crackle of the flames as the thick, acrid smoke climbs into the air. The radiant heat as the fire consumes the wood and compromises the metal. The way I describe it...many probably have not witnessed this firsthand. Suppose though, that this bridge isn’t really a bridge, but a relationship that’s been cultivated...and opportunity that’s been offered. Look at it through these metaphoric lenses, and I bet there are plenty who have witnessed the devastation of a burning bridge. 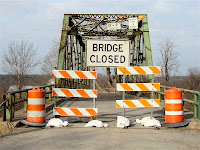 It’s tough to tell the future. It’s mostly guesswork based on probabilities with a hint of possibility mixed in for good measure. With complex situations such as personal relationships and expanded networks, there really is no telling what direction life will flow at any given moment. Every decision is thought to be the right one...except when we’re making the wrong one, and it isn’t until we look back with the intent or anticipation of revisiting familiar ground, that we notice the hazy cloud of smoke from the scorched bridge we have burned. We’ll call this phenomenon the “surprise inferno”...and chalk it up to careless actions taken without the benefit of heartfelt contemplation. 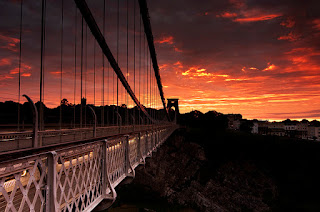 The surprise inferno can happen to anyone, but mostly it occurs when emotions collide within, causing extreme friction until a spark is ignited...causing a flame with which the embers fly freely toward an unsuspecting bridge. Sometimes these bridges can be rebuilt or repaired, depending on the extent of the damage and the insurance policy we have invested in the situation or relationship. A large investment usually can pay large dividends...but nothing is for certain.

It goes without saying (although I’m saying it), that the accidental flame is preferable to the intentional scorching...depending on which side of the bridge you’re on. There are times when we set fire to the bridge deliberately...a premeditated act of arson, wherein we are looking to make a bridge nothing but ashes scattered in the wind. We’ll call this occurrence the “fire bug”...and credit it as the act of deep seeded emotions thoroughly filtered through profound thought. We’ll call it that, but the truth is it can be one or the other...and still have the same result. The occurrence is not accidental...and the burnt husk that used to be a bridge is not so easily rebuilt.
We all laugh (or perhaps some don’t), at the clip of the lottery prank where somebody is led to believe they have won the lottery...and goes on to burn bridge after bridge (deliberate or accidental?) in a flurry of celebratory delight...only to find out moments afterwards that they didn’t win anything...and have instead, lost quite a bit.
It would behoove us all to reflect and recognize the bridges we’ve burnt...and possibly notice the ones still burning. I’ve “fire-bugged” a few, but I know I have no intention of crossing that chasm again...and I’m not inclined to fight the fires of any still burning since I didn’t set the blaze. However, I am very mindful of some of the wonderful structures I come across that connect me to places I’ve never been before...and have learned that sometimes a few minor repairs can preserve the bridge, and it need not be turned to cinder.
Sometimes the bridges we build enhance the superhighway of life and expand our travel options...and other times they take us into areas we wish didn’t exist. The fortunate among us build more bridges than we burn...and burn the right ones when the blaze needs to be set.
Posted by Dennis Kreative Idea at 2:47 AM